Making use of potatoes 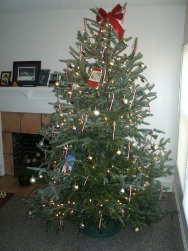 Our first Christmas tree in our new home is beautiful in its simplicity. A few ornaments, candy canes and Christmas cards adorn the branches of a six foot Fraser Fir purchased for a few dollars at a roadside stand. Three hundred lights strung around the tree give it a magical glow visible through the living room window at night. And thanks to the thoughtfulness of a special young lady, a large red bow perched atop the tree has given it character that no glowing star could achieve.

Is it a perfect tree? No. There is an area to the left of the tree where the branches are bent slightly, giving it the illusion of a gap in its side. But the tree has been the perfect addition to Poet’s Cottage during this holiday season. The tree’s scent, vibrant green branches and, yes, its imperfections have endeared it to my daughter and me.

I will be saddened to remove it in a few days.

I recently purchased two bags of potatoes, a buy one get one free deal at the local grocery store. There are a lot of ways to make use of potatoes. My father’s specialty go to meal was stew beef, cornbread and stewed potatoes (that’s what he called them). He followed no recipe. Basically, he diced a few potatoes then tossed them into a pot coated with a little vegetable oil. He then filled the pot with enough water that left about two to three inches between the surface of the water and the potatoes. Boiling the potatoes slowly on a medium high setting was necessary to deter sticking. Finally, he seasoned his stewed potatoes with a stick of butter, salt and pepper prior to serving.

My father discarded the nutrient laden potato skins and, admittedly, I used to discard the skins too. Figuring in the frugal factor, I now bake the skins whenever a recipe calls for me to peel a potato. Here’s the recipe I use for baked potato skins:

- Melt the butter in a skillet over medium heat.
- When the butter is hot and bubbling, add the garlic.
- Saute the garlic until softened and fragrant (about 2 to 3 minutes).
- Place the potato skins in a large bowl.
- Pour the garlic butter over the skins and toss in the bowl until coated evenly.
- Place each potato skin, skin side down, on a shallow baking sheet.
- Sprinkle generously with pepper.
- Sprinkle lightly with salt to taste.
- Preheat oven to 350 degrees.
- Bake the skins for 30-45 minutes or until hot, crisp and golden.

Here’s one of my poems, a scene I observed a few years ago; an old couple, very much in love, living frugally.

They sit in a booth made for two,
thin, frail, toothless. . .
he, in bib overalls and a tattered flannel shirt,
she, in a faded blue dress and yellowed sweater,
dining on grilled cheese sandwiches and hush puppies,
drinking sweet iced tea out of styrofoam cups,
surrounded by a lunch crowd
feasting
on platefuls of Carolina pork barbecue
(the scent of hickory-smoked meat thick in the air).

She takes a paper napkin, reaches across the table,
wipes a spot of ketchup
from the corner of his mouth;
he smiles, winks,
stops the waitress,
orders two spoons
and a single-serving of banana pudding.
Their hands, spotted with age,
join in the center of the table;
their backs
curved by time
into a perfect bow.

Email ThisBlogThis!Share to TwitterShare to FacebookShare to Pinterest
Labels: Potatoes, Side Dishes, Stews