Comfort Food - two words that have become the catch phrase for selling food magazines.  While waiting in line to pay for a few groceries at the supermarket the other day, I counted four magazines using the term “Comfort Food” on their covers. After reading Taste of Home Comfort Food, Cooking Light Comfort Food Classics, Southern Comfort Food and Soups and Stew Comfort Food, I must admit that I fell under the spell of those two words and nearly added a bit of reading material to my shopping cart. The sheer cost of the magazines jolted me out of my reverie. After all, the cost of one of those magazines can buy a lot of pasta, rice and beans.

But how do you define Comfort Food? I’d like to hear from you. What do you consider to be a Comfort Food? For me, it’s a bowl of homemade chili with a side of cornbread in the winter. In the summer I would consider a tomato sandwich (with mayo and black pepper), a slice of watermelon or a bowl of homemade ice cream to be comfort foods. Answers.com defines Comfort Food as “Food that is simply prepared and associated with a sense of home or contentment.” The validity of that definition became apparent to me the other day after I sent a picture of cornbread, mustard greens and pinto beans I'd prepared to a friend who had recently taken a job in Kauai. My friend jokingly scolded me when he replied to my email, stating that the picture made him long for home and that it was no longer possible for him to hop in a car and drive a short distance to taste his mother’s homecooked meals. Perhaps we’ve found Comfort Food of the highest calibre at mother’s and, yes, even grandmother’s table!

The following is a basic crock pot roast recipe. There are many variations to be found on the Internet these days. I offer it here to my friend who resides on a speck of land in the middle of the Pacific Ocean and to anyone who would claim that they have no cooking skills. Share this simple, tasty meal with friends or family and your reputation as one who can prepare Comfort Food will grow.

Pour the broth or water into the crock pot. Add the pot roast. Pour the package of onion soup mix onto the roast, spreading it evenly. Add the vegetables. Cook on low for about 7 hours. Serve over rice or with a biscuit. 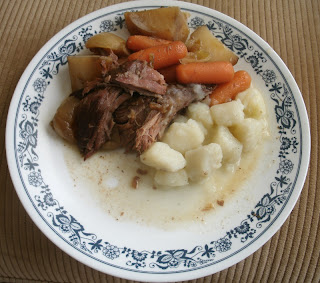 I paid half price the other day for a two pound pot roast that was set to expire in two days. Using the above recipe, my daughter and I enjoyed several meals out of that pot roast.

I’ll close with this prose piece that was originally published in the November 2009 issue of The Dead Mule School of Southern Literature.

You never formed sentimental attachments to live stock on the farm—dogs, cats, even a mule was okay, but be careful about making a pet of chickens or cattle, anything of that order. That’s a lesson I learned the hard way. I was seven at the time, but a big boy for my age. My family and I had gathered around the supper table to indulge in the delights of one of Momma’s home cooked meals. I had just forked my second sausage patty (for it was not unusual to have breakfast for supper or supper for breakfast, you ate what was available) when it suddenly occurred to me to inquire as to the whereabouts of my pet pig, Sparky, a scrawny little thing that I’d adopted, helped feed, and watched grow into a massive 500 pound hog. Sparky had been missing for a couple of days, which wasn’t unusual as he had an annoying habit of breaking out of his pig pin. Daddy and I had trudge the hills and hallows of Western Rockingham County on more than one occasion, in mud, rain, and sometimes snow looking for that pesky hog. Most of the time we’d find him waiting for us when we returned home, snorting and grunting for something to eat. I’d have inquired about my missing hog sooner, but I’d been preoccupied, of late, with a tree-climbing, freckled-faced, red-headed girl what lived down the road. (Trying to keep up with that girl sure worked on a fellow’s appetite—but I digress.) So, amidst the clatter of forks, spoons, and plates, I put the question to Daddy, “Have you seen, Sparky?” says I, during a lull in the dinner chatter.

“Why yes, son,” says Daddy, looking over his glasses, “I saw him recently.”

“Is he nearby?” I asked, dipping another spoonful of tomato gravy onto my plate.

“Yep,” says Daddy, “as a matter of fact, there’s a sizable chunk of him on the end of your fork.”

Peeing on an electric fence couldn’t have jolted me more than the impact of Daddy’s words. The table fell silent, except for a slight snicker from my oldest buck-toothed sister, Essie, who enjoyed tormenting me whenever the opportunity arose. I stared at my fork, gravy dripping off the remains of my pet pig, wondering if I was looking at the end that snorted or the end I wanted to kick whenever he broke out of the pin. My heart sank… …right into the pit of my ravenous stomach.

“Dang it,” says I, taking another bite of Sparky, “I reckon he had it coming.”

Y’all have a great week!
Posted by Curtis Dunlap at 1:41 PM

Email ThisBlogThis!Share to TwitterShare to FacebookShare to Pinterest
Labels: Meats