In the world of food television shows and upscale restaurants, I have a difficult time understanding why someone would pay an exorbitant price (especially in this economy) for an entrée that appears as a tiny circle in the middle of a plate. Sure, I know “presentation” is an important element in the dining experience and all that vacant space left on the plate helps the eye to focus on the morsel in the center, the bull's eye of the meal if you will. I’m just of the mind that I won’t pay for an entrée that, in this humble poet’s opinion, should be demoted to appetizer status. I don’t want to eat dinner and be hungry an hour later. I want my appetite satiated completely. I want plenty of good food at a decent price. Fill my plate and if I can’t eat it all, I’ll take leftovers home.

Before I go further, let me clearly state that I’m not dissing food television shows, upscale restaurants or chefs for that matter. I’ve enjoyed meals, in one form or another, by all three. In fact, I have a friend who’s attending culinary school and is well on his way to becoming a chef. I blame my gluttonous love for large portions of food on my southern upbringing and will vehemently claim that the good state of Texas ain’t got nuthin’ on its southern sister states in the BIG department when it comes to supper time. Dining is an event here in the south; it’s something to be shared and enjoyed. We often cook so that there will be leftovers. Sometimes we cook for the sheer joy of cooking then deliver a hefty amount of food to a friend or neighbor as a token of appreciation and love. Southerners learned long ago that you don’t have to skimp on portions to eat frugally. A couple of biscuits smothered in tomato gravy with several dashes of black pepper thrown in for good measure can occupy those aforementioned vacant spaces of even the largest plate and be a tasty inexpensive meal.

I’ve already shared a dining experience I had at my grandmother’s table in the form of a prose poem. Here are two additional food moments that helped mold me into the kind of guy that would frown on being served a tiny Cornish Hen breast with a broccoli spear, drizzled with a sauce for dinner. (Okay, that was a slight exaggeration but maybe the reader will understand the gist of my complaint. Sometimes, less is more but not at the supper table!)

Margaret is a lady who lives in the community of Shiloh, a few miles east of Mayodan. Occasionally, I’d stop by to visit her son, a longtime friend. I cannot remember a time when Margaret failed to feed me while I was there. It never mattered that I’d already had supper at home. This wonderfully, splendid cook always insisted that I have something to eat while I was in her home. Margaret’s hospitality was as big as her heart and the portions were amazing! I’ve dined on as little as a slice of homemade chocolate cake (a slice being nearly ¼ of the cake) and as much as a plate of fried chicken, mashed potatoes, corn on the cob, biscuits and gravy. To refuse food when Margaret offered it would be impolite. And I’ve never been one to be rude where food is involved.

Ruth was a member of my church. Sadly, Ruth died a few years ago. She was a unique woman who gave selflessly of herself to her community and church. I am not ashamed to admit that I’d planned on skipping church one Sunday to go fishing with friends until I found out that a covered dish would be served after the sermon, which could mean only one thing: Ruth would be there with her amazing caramel cake. I quickly canceled my fishing trip. I went to church and listened patiently to the sermon that day. Later, I enjoyed a good old fashioned heartfelt hug from Ruth and two slices of her caramel cake. Sometimes, a way to a man’s soul is through his stomach, especially when good food is in abundance.

The following is my recipe for tomato gravy. Serve this with a sausage patty over biscuits. Figuring in the frugal factor here, use whatever tomatoes you have on hand. Just be sure to use enough flour to thicken the gravy to a desired consistency and season it with salt and pepper to your liking.


Tomato Gravy
Set your stove top burner on medium-low. Add oil and one tablespoon flour to a skillet. Turn the heat up to medium and stir until the flour starts to brown.

Add the can of tomatoes including the tomato juice to the pan. Stir to break-down any globs of flour that may form.

Turn the heat up to medium-high. Start seasoning with salt and pepper. Stir constantly to avoid sticking.

When the pan starts to boil, add the flour water mixture and continue stirring. Turn the heat back down to medium. Stir until the gravy thickens. Continue seasoning with salt and pepper to your liking.

Serve over southern biscuits with a side of bacon or sausage.

Here’s a picture of a pan of tomato gravy I made with hog jowls. 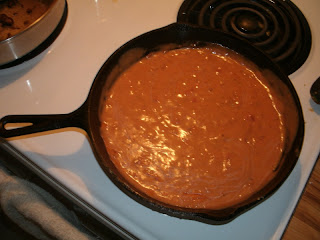 During this time of soaring gas prices, when we pay more and receive less wherever we shop, it’s nice to know that there are still a few tasty meals that can be prepared in abundance. We live in times when many of us are spending less on extravagant meals. People are focusing more on necessities. Perhaps the following haiku I penned on my way home from work illustrates this shift back to basics and the essential things in life:


down sizing...
a satellite dish
shelters the wood pile
Posted by Curtis Dunlap at 7:31 PM

Email ThisBlogThis!Share to TwitterShare to FacebookShare to Pinterest
Labels: Gravies