A Mentor Stops By

Last month I sat in Susan’s living room talking poetry with her and her daughter Deedee. I commented that Paul MacNeil, one of the editors of The Heron’s Nest, a haiku journal, would soon migrate north from his home in Florida to his cabin along the shores of Onawa Lake in Maine. Paul spends summers there enjoying his beloved cabin by the lake, writing poetry, entertaining family and friends before migrating back to Florida when autumn’s chill sets in.

I’ve known Paul for over a decade (thru email correspondences) and I’ve had the good fortune to meet and talk with him a couple of times, once at a Haiku Holiday and then at a Haiku North America conference. Paul is an excellent conversationalist with a great sense of humor. He has also become a great friend and mentor, instructing me in the fine art of haikai no michi (The Way of Haiku).

When I commented that it would be nice to see Paul again, Susan spoke-up and said, “Why not invite him to stop by on his way to Maine?” I don’t know why I hadn’t thought of inviting Paul to Mayodan sooner. Entertaining family and friends is something that I’ve wanted to do since I became a resident of Poet’s Cottage. What a great idea! I thought. I hurried home and sent the following email:

Susan and I are wondering if you'll come thru NC anytime soon?

Bottom line, want to sip moonshine and stay a day or two?

To which Paul replied a few minutes later:

I KID YOU NOT!!
Getting your latest recipe, I was putting the final edit on one.  This very evening!
Great minds?

I am heading north in June and will consider when I get a narrower time frame.  Big thanks for the invite to visit you and Susan.

With a little cellphone assistance in navigating Mayodan’s three stoplights Paul arrived at Poet’s Cottage on June 9th. Upon his arrival, The Heron’s Nest editor gifted Susan and me two bottles of wine and copies of The Onawa Poems 1999-2008, an anthology of haiku and renku with poems by Paul and the numerous visitors to his home in Maine.

Here are a few poems from the anthology:

we tolerate the heat
with the help of
a single malt

Susan and I wanted to entertain our friend The Frugal Poet way. I made southern style biscuits and gravy for Paul on Sunday morning and Susan, well, my phenomenal cooking sensei prepared one of the best meals I think I’ve had the pleasure of eating: broccoli casserole, creamy rosemary onions, pork loin (drizzled in a homemade honey mustard sauce) and for dessert, homemade vanilla ice cream. 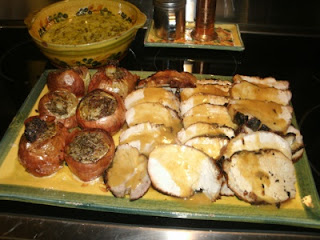 Suffice is to say that we all had a great time. Paul continued his trek to Maine on Monday morning, inviting Susan and me to visit his cabin by Onawa Lake. I fully intend to visit Paul at his cabin in the not too distant future.

Here's a quick and easy recipe for cucumbers.

I’ll close with a poem from The Onawa Poems that best describes the time we had with Paul.

warm kitchen
the rise and fall
of friends’ laughter


Photo by Alana Dunlap
Posted by Curtis Dunlap at 3:35 PM