I’ve had my Aunt Grace on my mind lately. She passed away a few years ago, living a good, full, long life. Aunt Grace was one of eleven siblings (including my father) who grew up on a tobacco farm during The Great Depression. Being frugal was never a choice for a lot of people at that time. Frugality was a necessity. You simply had to make ends meet. You had to stretch your food dollars, rely on gardening and canning vegetables and, quite often, hunt or fish for your next meal; if you didn’t do these things, you would go hungry.

I’m ashamed to say that I don’t think I paused long enough to savor the times I spent at Aunt Grace’s table. I visited Aunt Grace nearly every weekend during the 60s and 70s. As a young boy, I suppose I didn’t think that a time would come when I would not dine at Aunt Grace’s table, which makes the memories of her and her kitchen all the more special to me.

I recall a snowy day spent squirrel hunting with my dad and uncles Bill and Herbert. I enjoyed such outings, especially when I became old enough to carry and use a gun of my own. What started out as a great adventure in my young eager mind quickly became a cold and wet miserable ordeal by the end of the day. Having no luck at finding game, the four of us retraced our steps back to Aunt Grace’s kitchen. We were famished when we sat down at the supper table, nigh starving in fact. Aunt Grace didn’t disappoint in delivering a fine frugal meal that warmed us from the inside out. We gorged ourselves on crackling cornbread, pinto beans, creases with a side of bacon. For dessert, we had peach cobbler, fresh from the oven, with a dollop of vanilla ice cream added on top. Aunt Grace knew that I enjoyed watching that ice cream melt into the cobbler.

If time travel were possible, sitting down to a wonderful meal prepared by Aunt Grace would be high on my to do list and I’d savor every moment and every morsel of food.

Okay, I’ve bitten the bullet. I listened to my sensei and bought self-rising flour. Life is about learning and this ole dawg has learned to make a decent cherry cobbler. I’ve been told to follow the cuppa, cuppa, cuppa rule when making cobbler, which translates to 1 cup of self-rising flour, 1 cup of sugar and 1 cup of milk. I followed the cuppa rule, but added ½ teaspoon each of nutmeg and cinnamon into the mix.

Here’s the recipe I used for the cobbler in the picture.

Directions:
Place stick of butter into a casserole dish or pan. Put the butter and casserole dish into a 325 degree heated oven. While the butter is melting, thoroughly mix the first four ingredients. Add milk, continue stirring.

After the butter has melted, pour mixture into the casserole dish. Spread cherries on top and bake for about an hour or until the cobbler is a golden brown.

When it’s time for me to go,
I want to exit
like Aunt Grace
who,
being the oldest,
raised eleven siblings
after her mother died of pneumonia.
She breathed her last breath
one evening
sitting in a recliner
surrounded by loved ones,
watching a favorite TV program.
Her final words:
"No, I’m not ready for bed;
I feel so good,
I think I’ll sit here a little while longer." 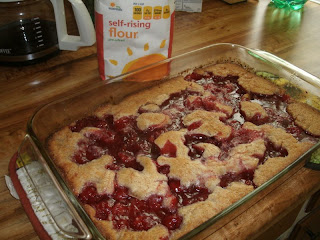 Posted by Curtis Dunlap at 2:02 PM

Email ThisBlogThis!Share to TwitterShare to FacebookShare to Pinterest
Labels: Dessert