Team Frugal. I like the sound of that. In the time that I have been at Poet’s Cottage, I’ve come to realize that I’m not the only one who has taken an interest in becoming more frugal in our day-to-day spending. The other day my daughter, Alana, opened the refrigerator door, looked inside, then said, “You’ve got to stop wasting money, Daddy.”

Surprised, I asked, “What do you mean?”

“Noooooo, I’m fairly sure I bought regular milk and buttermilk,” I said, defending myself, to which Alana, delighted at having an opportunity to point out my error, reached into the fridge and produced two half gallons of buttermilk.

I made a lot of cornbread that weekend, gifting two pones to a couple of my neighbors. I dislike wasting anything, especially buttermilk.

Frugality extends beyond the kitchen into other areas of our home and, at times, can save significant amounts of money. Alana and I have been diligent in turning-off unnecessary lights. During the cold winter months, we’ve been great about keeping the doors to our home closed, reducing our gas and electric bill.

A few months ago, I received a notice from Duke Energy stating that my electric bill would be reduced by $40 (I’m on the year-round average payment plan). The reduction was directly related to our attempts at saving energy in our home. Susan’s daughter, Deedee, suggested that we put our $40 savings aside each month for a travel fund. If you put things in perspective and consider Deedee’s suggestion, saving energy in our home could pay for a beach trip.

Frugality definitely has its benefits.

My daughter will be 13 years old tomorrow, but I’m the one who feels like he’s been gifted a birthday present: A highly intelligent, caring, witty, beautiful, frugal daughter. :)

A few notes from this week:

Susan has been canning veggies from her father’s garden nonstop for the last three or four weeks. I offered to write for Frugal Poet today, giving her a break from wordsmithing. (I ain’t crazy. There’s a chance I could be gifted a jar or two of veggie goodness!)

I received a phone call the other day that could have been an attempt at infecting my computer. I’m very cautious when I receive phone calls from people asking me to connect to a web site. Here’s the gist of my conversation with the “computer security expert”:

Curtis [answering the phone]: Bartle Doo?
Phone Guy: Excuse me?
Curtis: I said, "Bartle Doo?"
Phone Guy: Yes, well, my name is Raj and I work for Microsoft Security...
Curtis: Microsoft Security? Isn't that an oxymoron?
Phone Guy: I'm sorry?
Curtis: Don't be sorry. It's not your fault that Microsoft makes the most insecure operating systems on the face of the planet.
Phone Guy: Well, I'm calling to...
Curtis: ...In fact, I'm installing Linux on an old laptop as we speak...
Phone Guy: Linux?
Curtis: Yes, it's a free operating system and it's more secure than Windows. You should try it! [Phone Guy starts laughing...]. Seriously, go home, download Linux -- there are many varieties -- and install it over Windows! You'll be a helluva lot less prone to computer viruses.
Phone Guy [laughing]: Yes, well...thank you...[and he hangs-up the phone]

Bottom line, be wary of phone calls that could be attempts at phishing your private information or infecting your computer.

I had surgery a year ago today. I penned this poem a few days after my surgery:

i am told
my thyroid was shaped
like a butterfly,
a butterfly whose wings
had grown disfigured
with lesions

Susan gifted me with enough jalapeno peppers for 4 ½ pints. I canned what you see in the picture. Here’s the recipe I used.

If you don’t know how to prepare your jars and lids, leave me a note in the comments section below. It’s easier than that cobbler recipe I attempted last week. :) 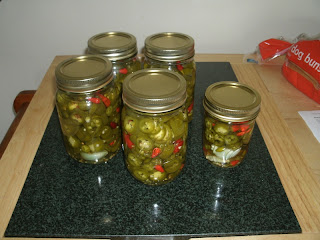