I was out of town last week and have had a few personal good things going on. Without giving the reader too much information, I’ll say that the move that my daughter and I made to Poet’s Cottage a year ago last month has been one of the best moves I’ve made in my life. We are happy campers and laugh frequently. Methinks life is often what you make of it, we must always strive to make it good.

Okay, an abbreviated post today, but one with a great recipe. Followers of this blog saw in my last post that I’ve started eating healthier, exercising and controlling my food portions--quite the opposite from my Food Portions post on April 1, 2012. So far, I’ve had little to no problem working-in a walk or workout during the course of a day. I’ve discovered that, if you use your imagination, you can be very creative when adopting a healthier lifestyle. Twenty minutes of exercise once or twice a day is easier to manage than thirty to forty minutes at one time during the day. I’ve learned that you don’t have to go overboard on a fitness kick to reap immediate benefits.

The mental benefits of healthier living is something that I’d forgotten about during my decade of inactivity. I feel better about myself. I’m happier, less prone to spiral into a chasm of negativity. While I’ve never been a hothead (seriously, folks, I’m an easy going dude), I’m less prone to become angry over small things now. Perhaps this is the greatest benefit one can reap from a healthier lifestyle. A sullen disposition, overtime, can have adverse affects on your physical and mental well being. And, if you think about it, you’re not doing the people around you any favors by sulking or brooding all the time.

Be thankful and savor the small things life has to offer.

morning prayer...
a wren chimes in
amid the amens

One of the foods that I used to gorge myself on is steak. I still treat myself from time to time, but what used to be one meal has become two or three meals (again, it’s all about controlling your portions). How’s that for frugality! Here’s how I cook a steak when I’m not grilling. 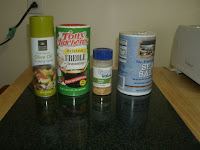 I firmly believe that a good steak does not need steak sauce. Season a steak properly and you’ll be pleasantly surprised with the results.

Set your steak out on a counter. Allow the meat to rise to room temperature. This will prevent the steak from becoming tough and chewy. 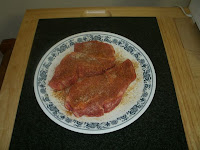 Rub the steak in olive oil. Coat the steak with the first three ingredients (your dry rub).

Place a cast iron skillet in a 500 degree oven. While the skillet becomes hot in the oven, turn a burner on top of the stove on High heat.

After the skillet becomes hot, remove it from the oven and set it on the burner (leave the oven on). 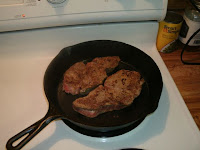 By the way, the steaks featured here are chuck eye steaks. They are loaded with flavor and are a lot cheaper than rib eye. 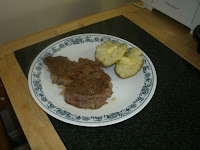 And, no, I didn't eat both steaks. I gave one to a neighbor who was kind enough to share homemade English muffins with me.